Change in Lillie has been dramatic

Lillie Dixon, who weighed 38kg when she was just six years old, is one of more than 300 children to benefit from a unique family-based childhood obesity treatment programme. 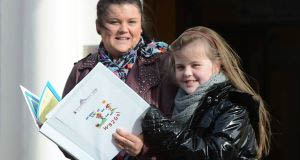 The W82GO childhood obesity treatment programme at Temple Street Children’s University Hospital in Dublin has been achieving a greater weight loss in children than the international average. Over the last five years, 312 children aged 18 months to 16 years have participated in the 12-month family-based obesity treatment programme. When the children were referred, 40% had risk factors for heart disease, 30% suffered from knee pain and breathlessness when walking, 60% suffered from poor self-esteem and depression, and 11% reported severe bullying. An assessment of the children’s weight at the end of the programme found that they had achieved a better weight reduction that seen in similar international studies.

Two years ago, Lillie, from Dublin, was admitted to Temple Street after a very bad asthma attack — her weight was making the condition worse. Lillie’s mother, Celine, like a lot of parents with overweight or obese children, knew her daughter needed help in managing her weight but did not know where to go. Celine said she was relieved when doctors suggested the W82GO programme for Lillie.

“Lillie had been very ill — I very nearly lost her so I was anxious to try anything that might help her,” she said. Celine added that she also felt partly to blame. “She was born prematurely so I tended to keep feeding her more to make her gain weight.” Lillie had also been prescribed steroids to treat her asthma, and weight gain was a side-effect of these.

Before the programme began, Lillie was reviewed by a team of specialists — a doctor, dietician, physiotherapist and psychologist.

“It was all about Lillie and I was happy with it being that way,” said Celine. “They were all talking to her while I sat in the background.”

Celine also joined a group of parents who were encouraged to make positive changes in their family’s lifestyle and provide a balance between nurturing and limit-setting. While the parents attended talks, the children participated in fun sessions aimed at improving their movement skills and boost their confidence in performing physical activity. Celine said she did not know Lillie’s current weight.

“I don’t use a weighting scales as a rule but I know the change in Lillie has been dramatic — her asthma attacks have decreased and she is no longer conscious of her weight.”

Lillie now plays sports regularly — she has joined a local GAA club and goes swimming once a week. Senior paediatric physiotherapist at the hospital, Grace O’Malley, said Temple Street was looking at alternative methods of delivering the treatment in a bid to improve access to the programme.